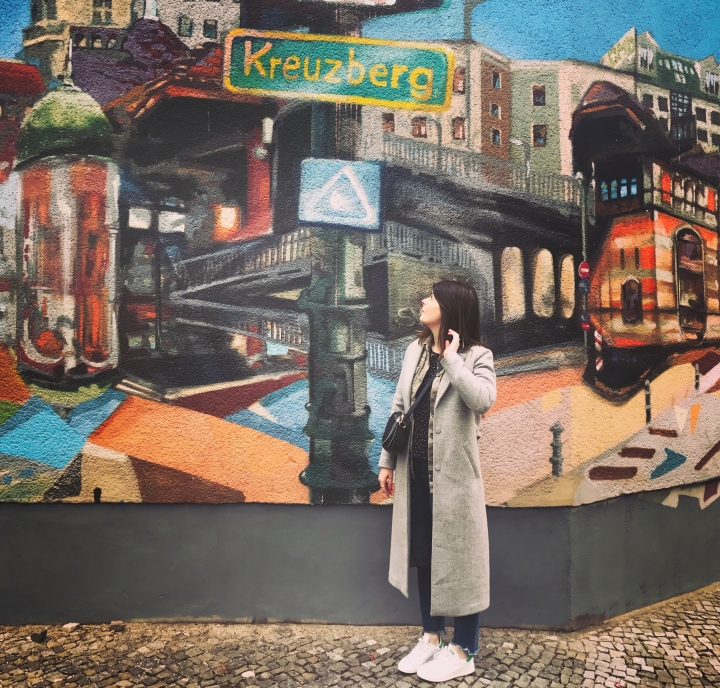 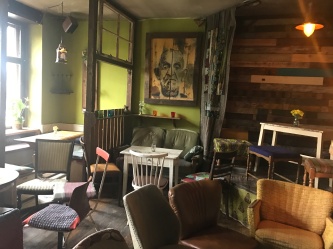 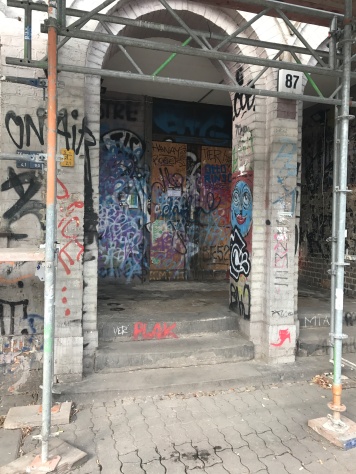 Living in the North West of England, with cities like Manchester, Liverpool and Leeds to name just a few, means that we are pretty spoilt when it comes to places to eat, drink and generally be (very) merry.

On deciding to book Berlin, after lots of ‘umming’, ‘ahhing’, cups of tea, ‘Oh, we’ll have another look tomorrow’ and cooing over other cities we have been lucky enough to visit of the last five or so years, we were expecting to visit a ‘grunge metropolitan’ of popular – and perhaps a little less popular – culture. Here are some of my musings on our visit to Berlin in April 2017. (Be prepared for lots of words, coffee and bracketed retorts…)

We thought staying in central Mitte would be a great anchor for the trip and had to let the ‘hipster-cool’ pipe dream of staying in an Air BnB apartment that screamed ‘Berlin’ in some vaguely stereotypical accent go, after finding that it wasn’t going to be quite so straightforward in our last-minute planning as they either were fully booked up for that half-term week (surprise, surprise!) or double the price (and the rest!) for that oh so convenient holiday timing (surprise, surprise!).

We caught the RB14 Express service from Berlin Schönefeld airport and it was a mere 3.40 Euros for a ticket which would be valid for at least a few hours after within relevant ‘zones’ (the ones you would probably want to use). TIP: Remember that you need to validate your tickets in the little machine by the platform. CUE: Sam’s mad dash from the Express train that was leaving in approx. 20 seconds… Friends and family had mentioned taxi journeys, but the train took around 35 minutes and was pretty scenic, as far as concrete can get you!

On arriving in Alexanderplatz, what initially struck me was how much Berlin seemed to look like, well, anywhere else, really. A shopping centre and concrete jungle greeted us and a huge tower, which I had researched was the Fernsehturm TV tower, the tallest building in Germany, where we would be having breakfast on day three. Surrounded by familiar-looking shops such as Primark and Diechmann, and battered by all-too-familiar rain and grey skies, I yearned for a smack in the face of Berlin’s culture.

Getting to the hotel was easy: a five minute walk and with lots of crossings you weren’t going to get run over within the first two minutes of the journey (like Amsterdam circa 2015) . A modern, comfortable room with all mod cons and lots of hangers (win!) greeted us and we promptly had a five-minute silent internet browse with the free Wi-Fi (no shame here) before deciding on where to venture out.

The quest for Instagram-worthy food and drink had begun…

We decided to walk out towards the Torstrasse main street through Mitte, where I had already ear-marked lots of independent coffee shops, concept stores and watering holes. As the evening fined up, we were greeted by a rather pretty sunset and surprisingly pretty-looking view which would give us all the false hope a bit of Spring weather over the days to follow. 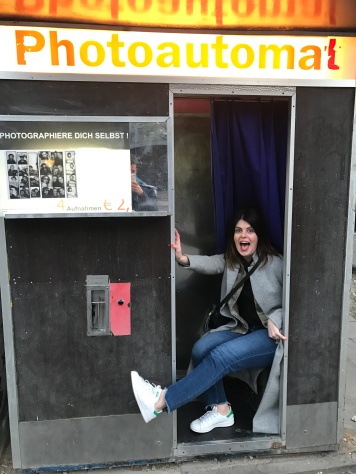 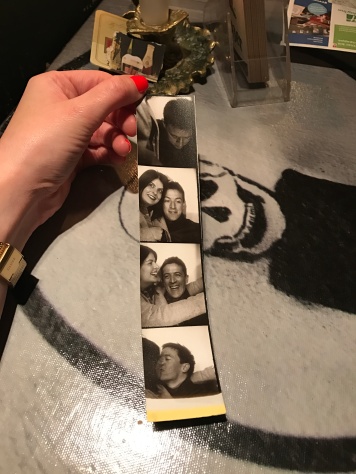 Café Chagall – A quirky candle-lit Russian restaurant/bar for our first meal which served ‘hearty’ feeds such as meatballs with Russian salad and a take on the Berlin speciality or ‘Currywurst’. Emblazoned with a giant white horse outside, it screamed ‘kooky’ from the outset and did not disappoint inside. They also served a great Lübzer Pils and the moody, gothic style was a great first find – would highly recommend! https://www.cafechagall.de

Stores Kitchen at Soho House – This was undoubtedly one of my favourite places on  the trip, and probably the least cultural! I’m not afraid to admit that we were waiting in the foyer of Soho House both times for the store to open at 10am…

A feast for the eyes and the palate, we came here for breakfast twice as I couldn’t quite get enough of the avocado toast (basic I know) and the flat whites were too Instagram-able to resist. On our second visit, I opted for a granola bowl, which was one of the nicest I’ve ever had, with banana, almonds, home-made granola, Greek yoghurt AND almond milk. It’s all about balance, right? But what really made this place was that we were in a really cool concept store, a ‘concept’ that Berlin has definitely got down to a T. We spent ages traipsing the rails of coveted designer items and obviously I took too many photos of the cacti – I’m only human! https://www.sohohouseberlin.com/en and http://www.thestores.com/berlin/ 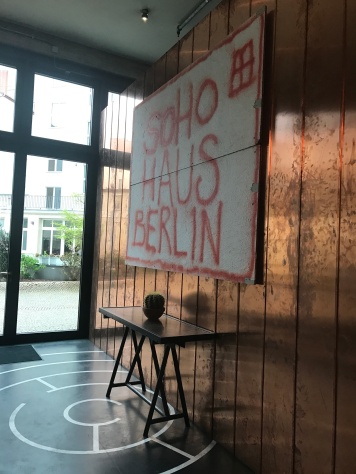 Pacifico Bowls and Buns – Our first stop in Kreuzberg, just off the U-Bahn, where the kimchi was a-calling. Sam opted for the Ranch Burger whilst I chowed down on ‘Porky Buns’ with pork belly, pickled cucumber, hoisin sauce and all the carbs… The Kimchi Fries were something to behold and I have often craved these since getting back! https://www.facebook.com/pacificoberlin/ 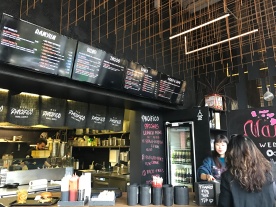 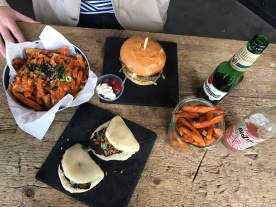 Lokal – After reading good things about this place both in the Wallpaper City Guide and on Trip Advisor, I booked the final night’s dinner here ahead of coming to Berlin as the farm-to-table ethos with its daily changing menu sounded right up our street and it certainly was! The menu featured highlights such as white asparagus soup, wild boar, venison and fresh as you like seasonal veg (I had mine with pasta) and the house red was a great pick! We loved the hanging lamps, cosy feel and that we felt like we were eating with the locals! The complimentary hazelnut Schnapps didn’t go down too badly either! http://lokal-berlin.blogspot.co.uk

ORA (APOTEKA) – Well, where do I start? What a cool concept! A restored apothecary/pharmacy, complete with antique bottles, jars and an impressive selection of familiar and not so familiar spirits. After perusing the impressive-sounding menu for quite some time, I went for a Negroni (surprise…) which did not disappoint and Sam was happy with his Pilsener (from a wide selection – I think he was on a quest to try as many as possible!). https://en-gb.facebook.com/oraberlin/

Dresden – Unpretentious, casual cafe/bar, where I tried a DREAMY Limoncello Collins. Loved the vibe of this place – such a mix of people: post-work professionals, first dates and reunited friends from all over the world! People-watching perfection! https://www.facebook.com/dresdeninkreuzberg/

Luzia – Looked like nothing from the pavement, but had great (and strong!) cocktails. Loved the exposed brick and Berlin-famous wall murals. Great atmosphere and cool seating, including old cinema seats and sunken-in sofas, which suggested just how popular it was. Another candle-lit, late night hang-out — one of our favourites! https://www.facebook.com/luziabar 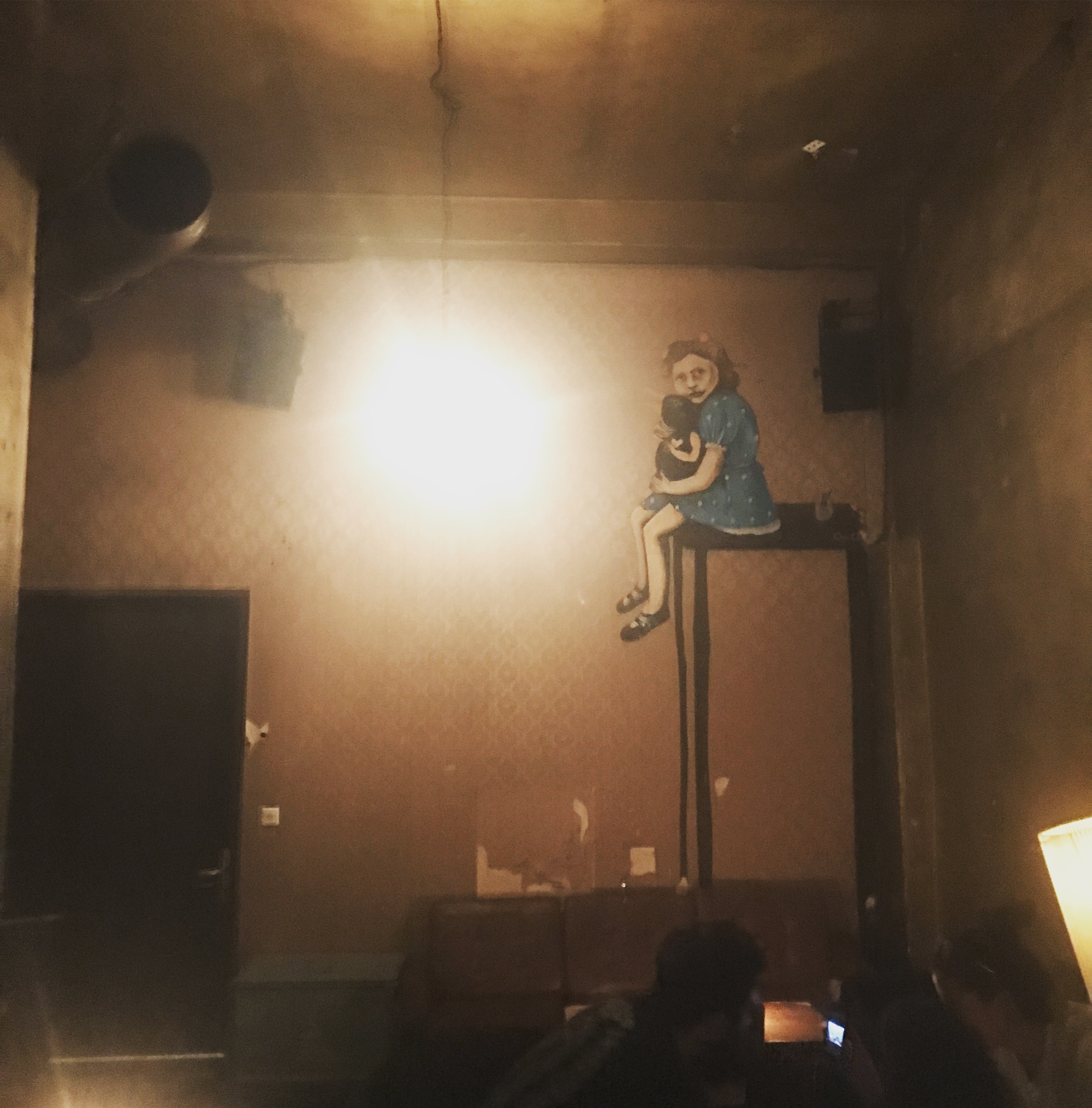 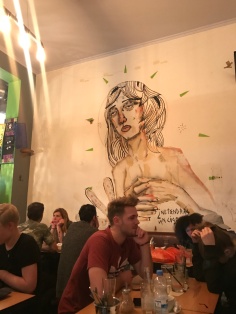 Mikkeller (Mitte) – A really cool place to sample some rather expensive, but tasty beers from all over the world. It was a shame in here because it was perhaps a bit unappreciated based on its unassuming location in Mitte. Maybe it was just the torrential downpours of the week that was keeping the punters away… Loved the branding, interiors, choice of beers and anywhere that has magazines and Aesop Resurrection Aromatique hand wash goes down pretty well in my books. http://mikkeller.dk/location/mikkeller-berlin/ 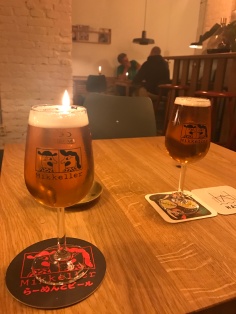 Filmkunstbar Fitzcarraldo Bar + Videothek – We hunted this place down on the last-minute recommendation of a friend who had travelled from Australia a few months before. He promised “classic Berlin” and it certainly delivered. From the ominous pram hanging from the frontage of the bar to the cheetah-printed hanging fabric on the toilet door, we knew we were in for a treat! Lots of open-mouth gawping and wandering around later, we ordered two Negronis and had to have a couple more just to be polite… Apparently this place is home to over 10,000 classic/art house/indie films which can be rented out from the basement – so cool! http://cinegeek.de/fitzcarraldo 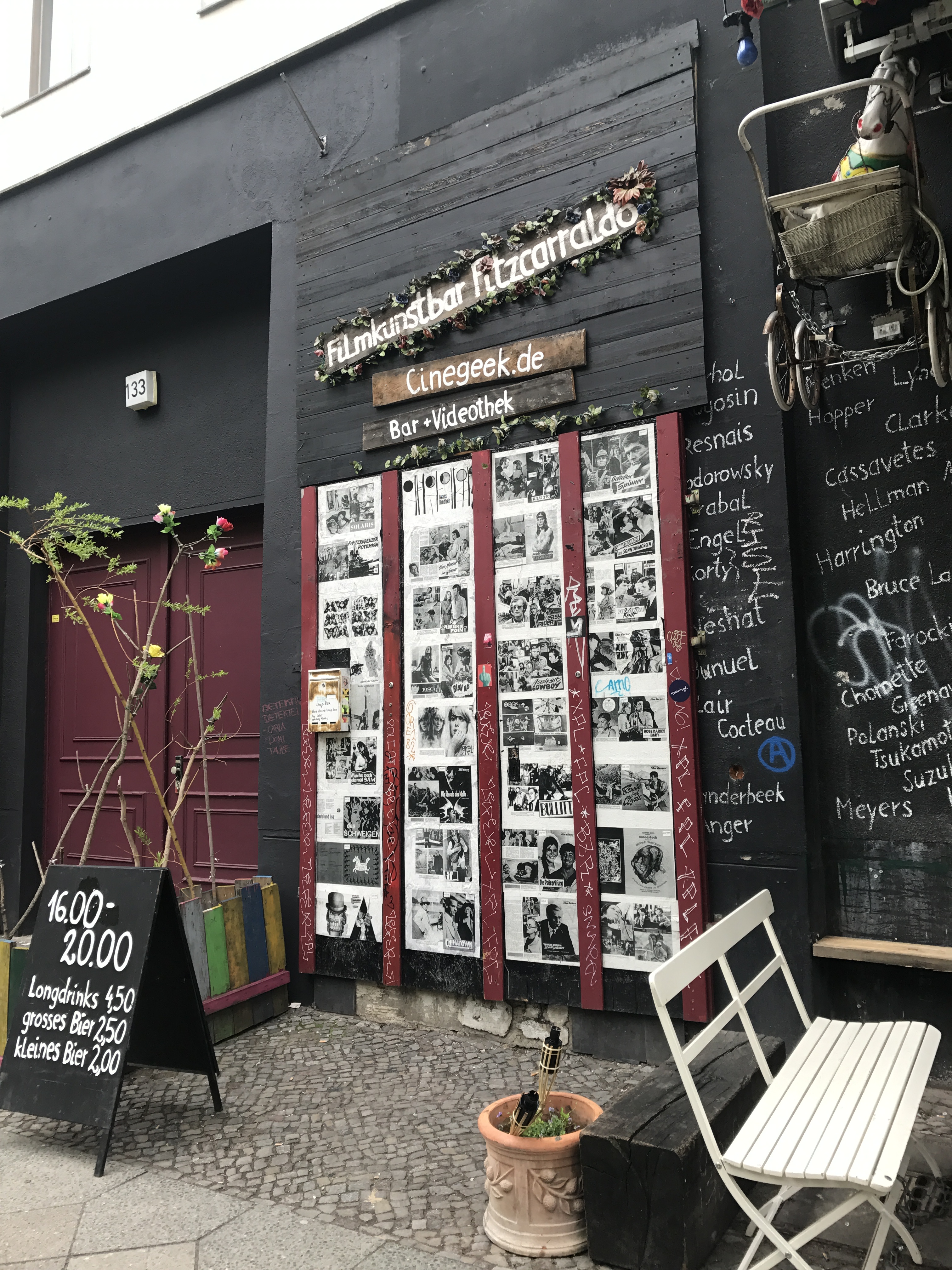 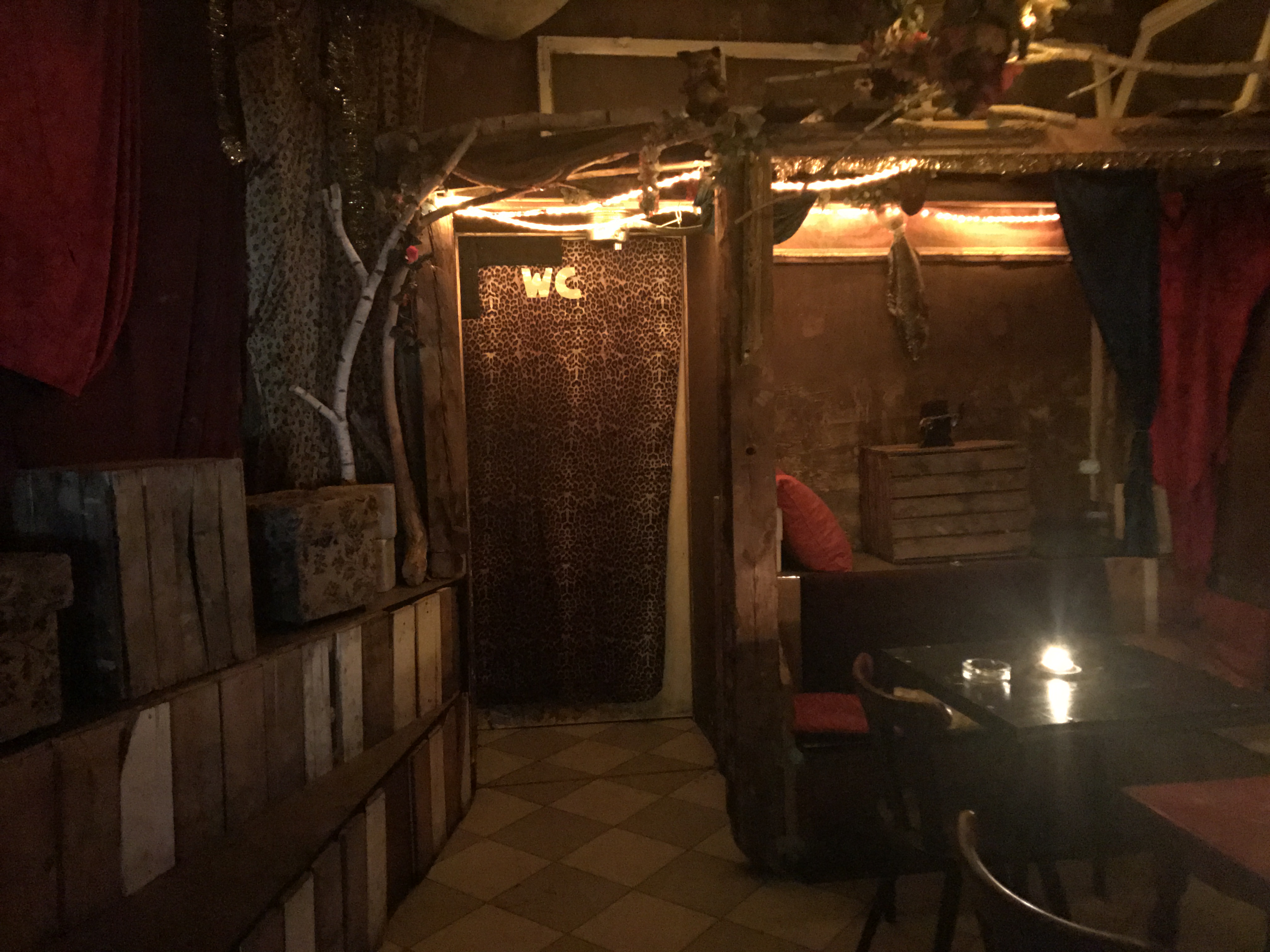 The Barn – After a walking tour and rain-bashing, we stumbled upon this little gem, which we could smell from around the corner. Some may say I have a sense for it and who am I to speculate? It was available all over Berlin and their roast is clearly coveted (I’ve since seen it brewed in the UK, locally I think TAKK, Manchester have it on their brew bar). Their flat white was a thing of beauty and their rye bread sandwiches were a treat after the walking tour. https://thebarn.de 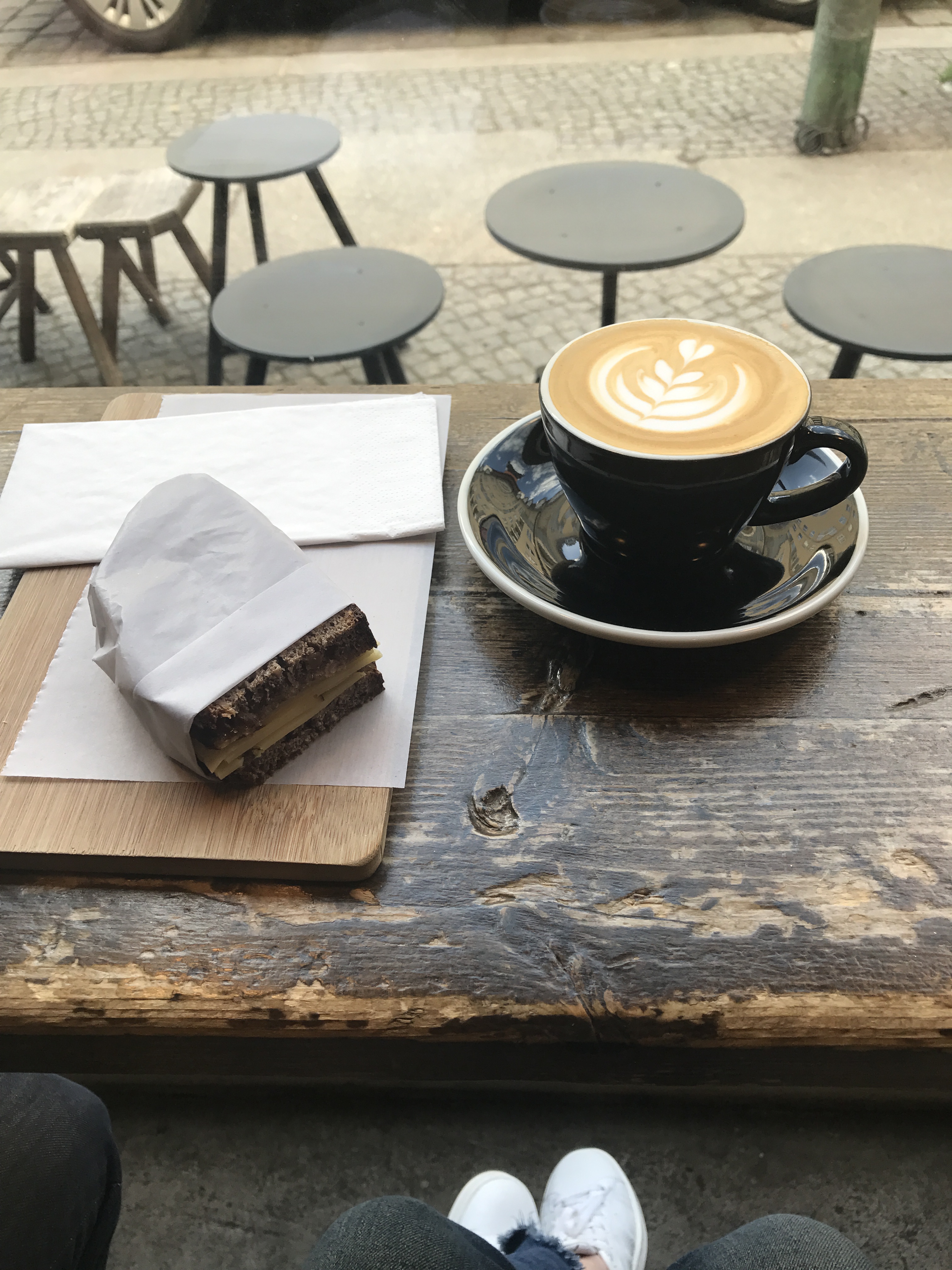 We signed up to a Sandemans New Berlin free walking tour, meeting at Brandenburg Gate and taking us around the Memorial to the Murdered Jews of Europe, the site of Hitler’s bunker, Checkpoint Charlie (although I wouldn’t bother with this poorly mocked scene in hindsight), Gendarmenmarkt, ‘The Berlin Wall’ (well, what is ‘left of it’), Pariser Platz, Book Burning Memorial and many more. Due to the wet weather, a few bits were cut short, but we found this a really good way of hearing more about the city and its history. It did help that our tour guide Georgia (with a really interesting Portuguese/Glaswegian accent) knew her stuff and her humorous approach (when appropriate) worked well with us. At the end of the tour, you simply tip what you thought the tour was worth.

Unfortunately, we missed out on the Reichstag Building as it appeared that you have to book at least three months in advance for entry – maybe next time… 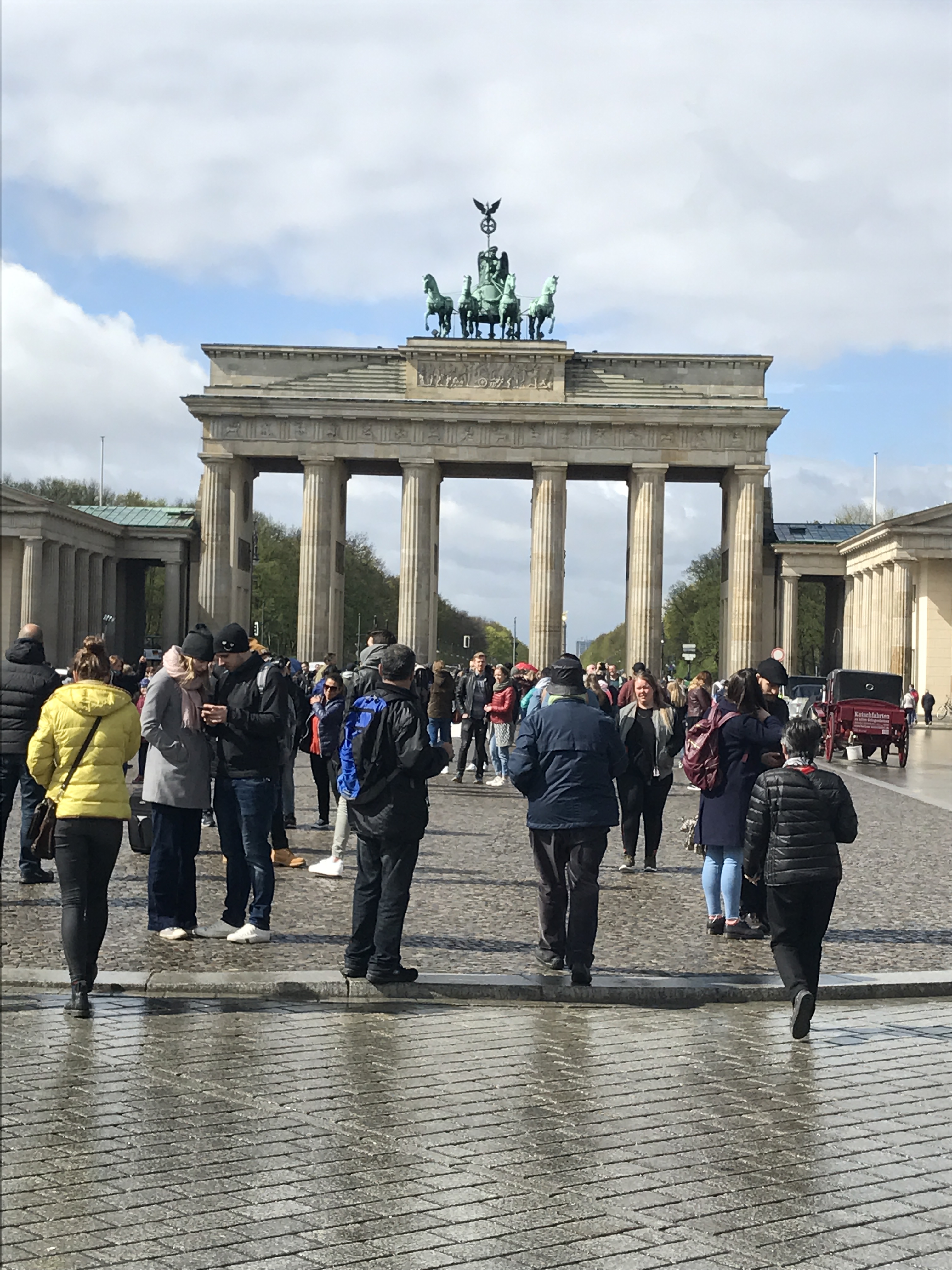 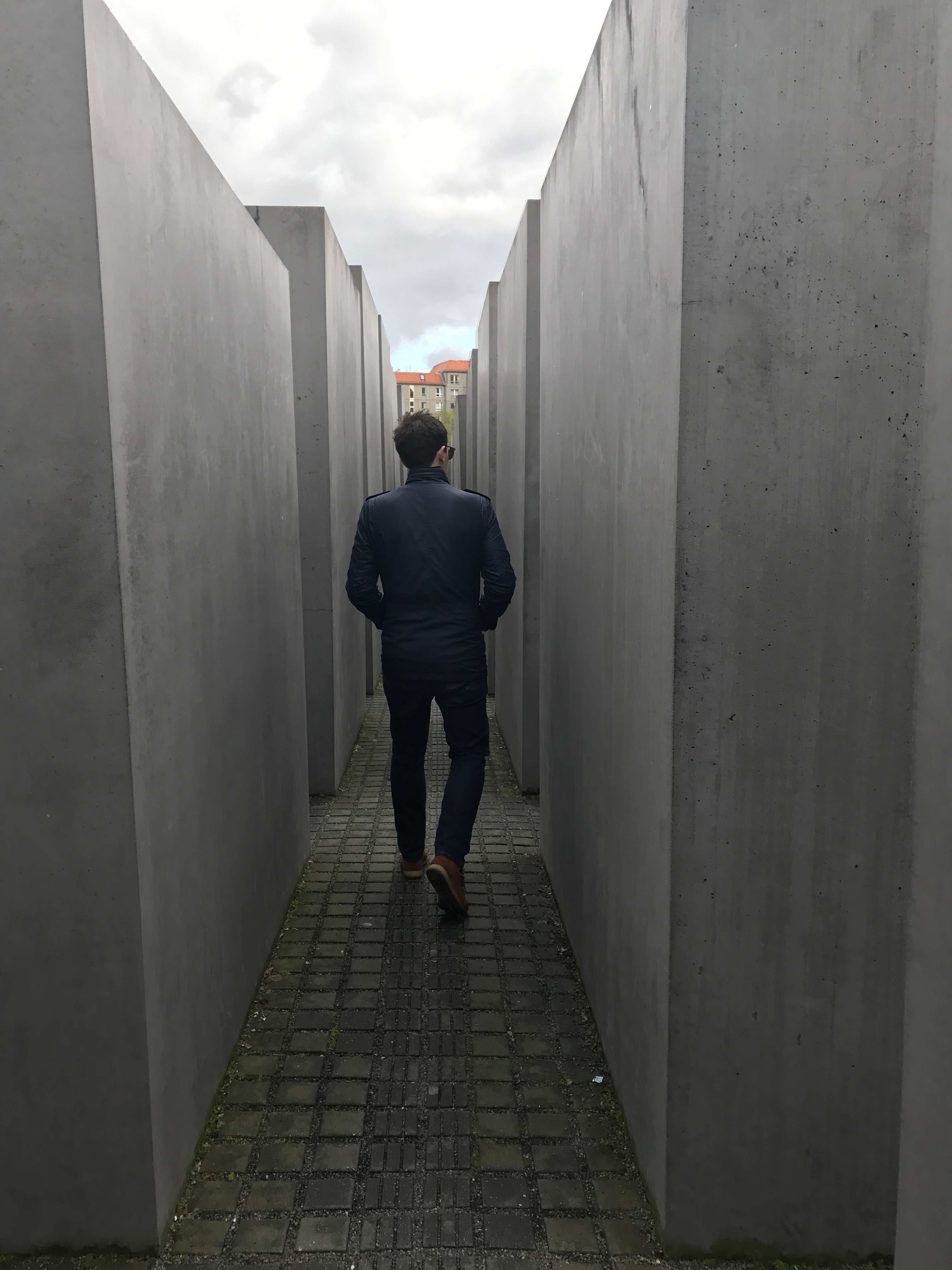 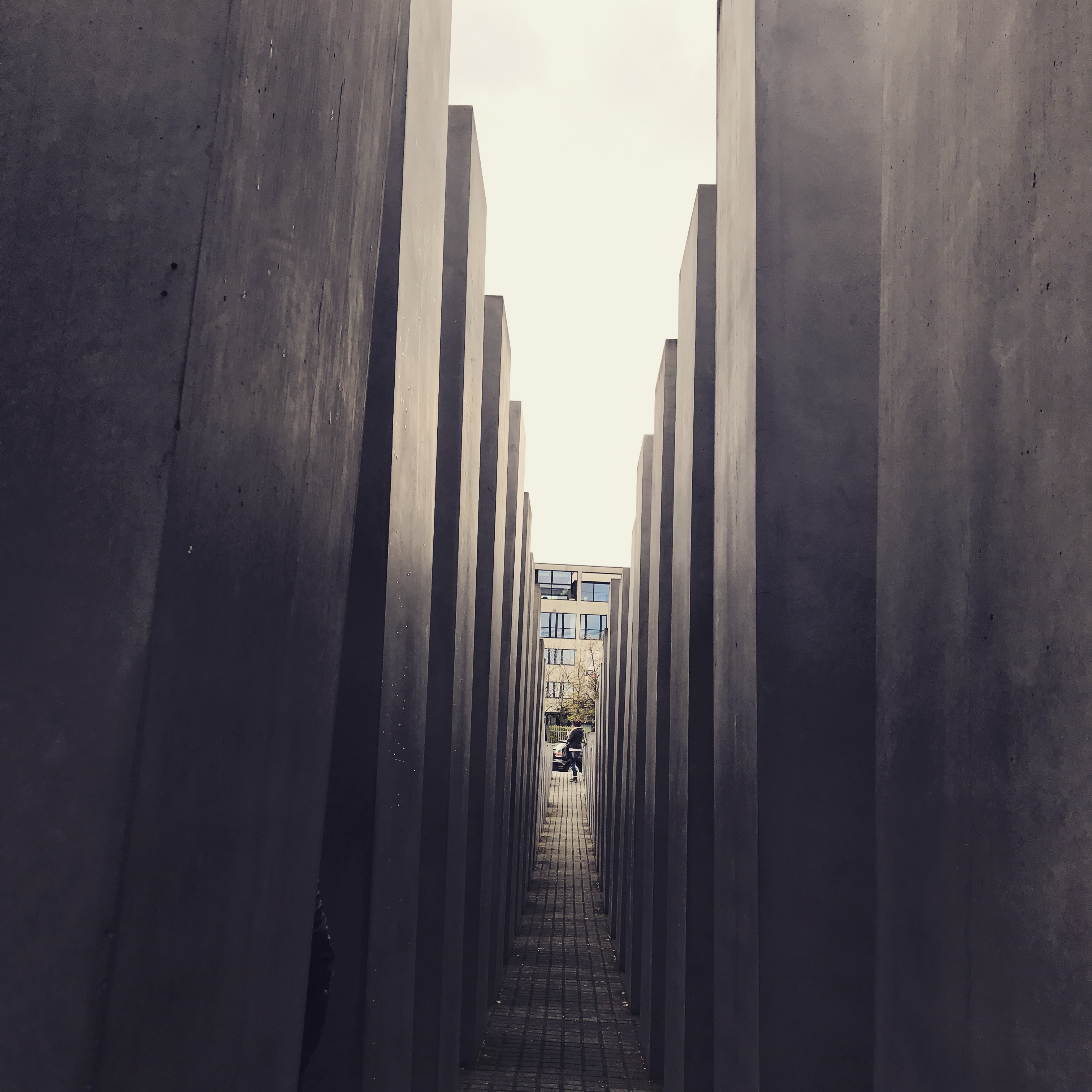 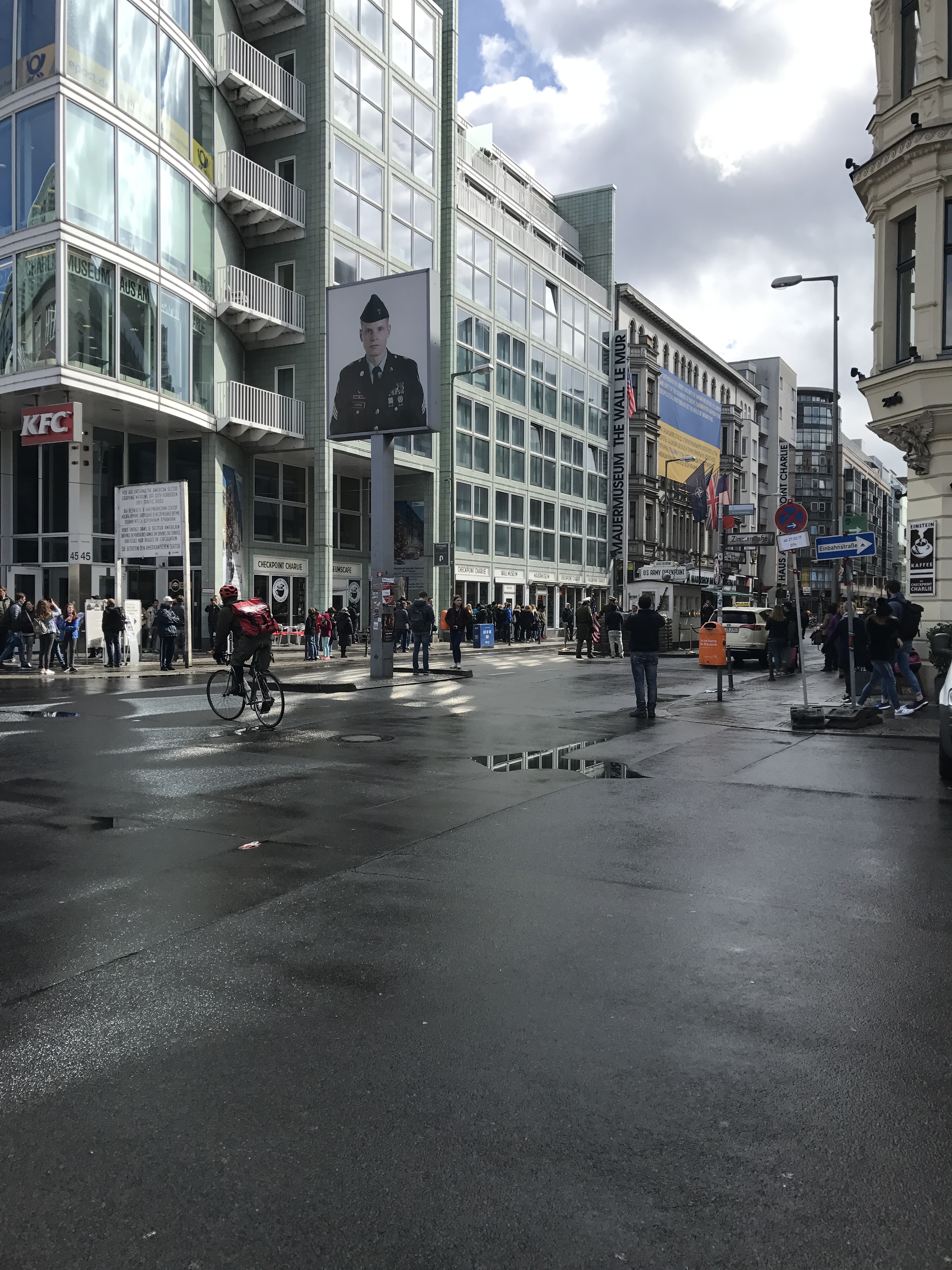 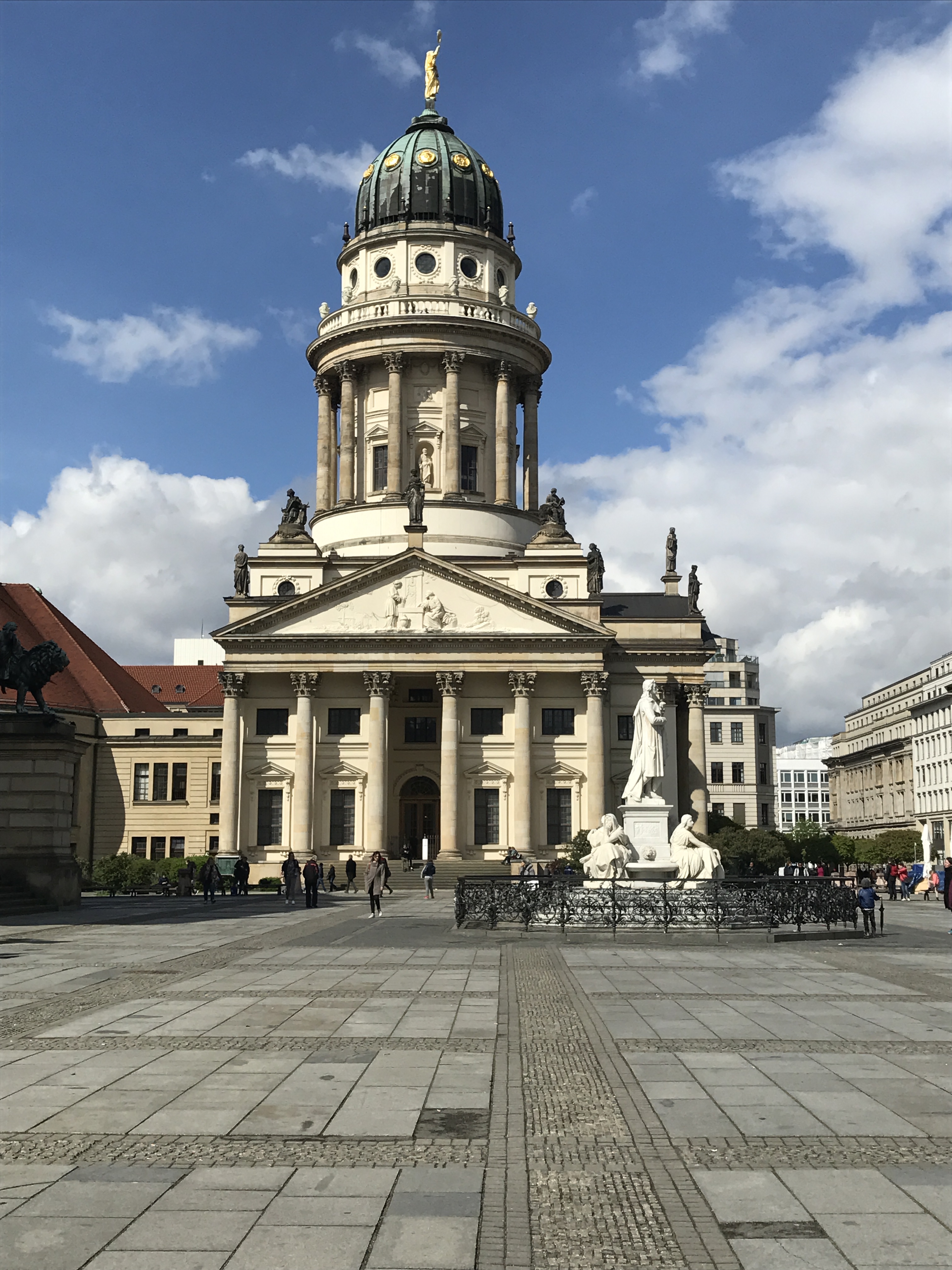 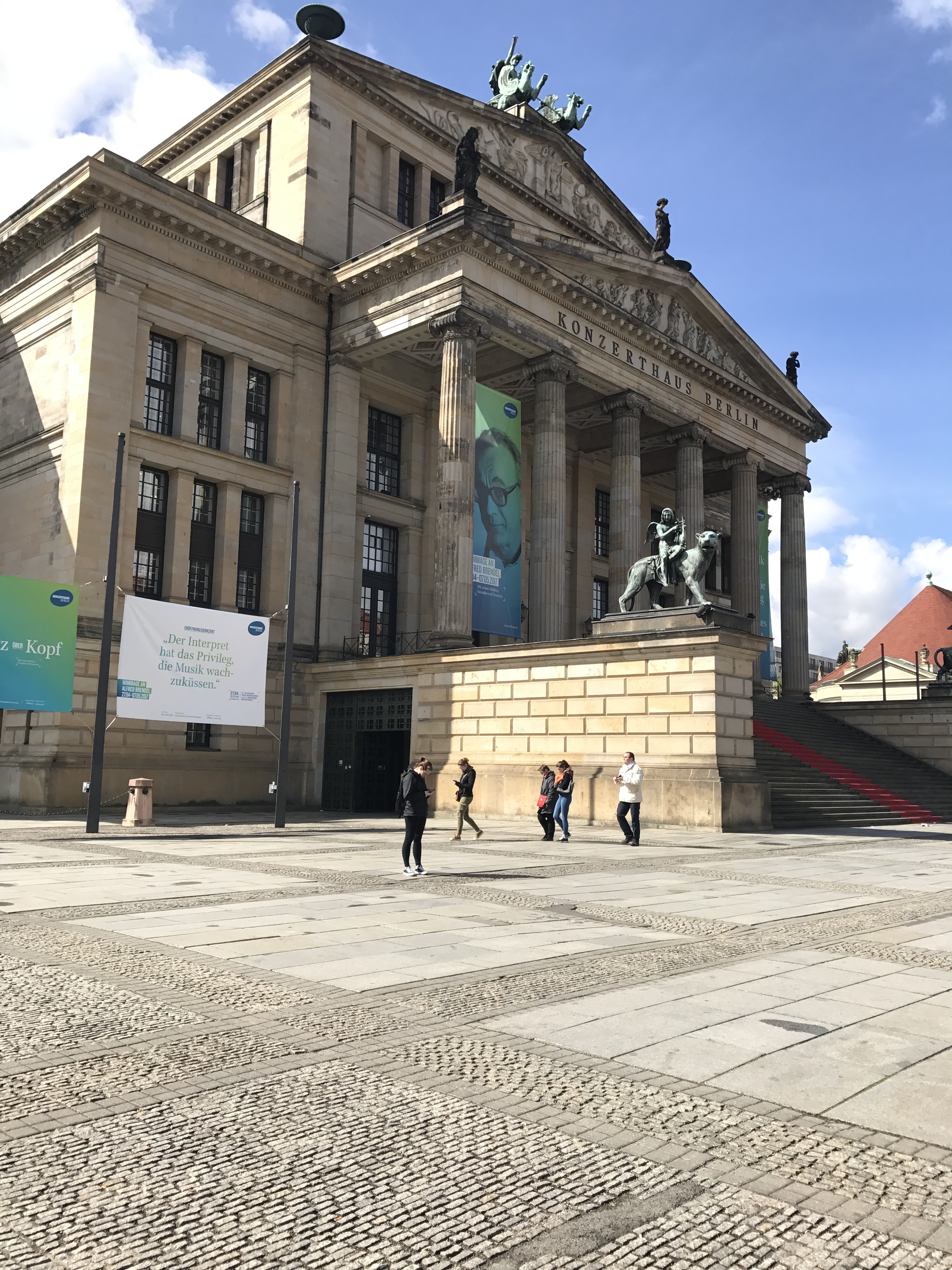 Fernsehturm – the famous TV tower in Alexanderplatz was actually quite exciting (after the security checks and super-speedy lift ride!) and we had breakfast up there one day on what we found out was a rotating platform – try that after a skinful of Margs… Any excuse for a nice bit of cheese and fizz for breakfast: I’m in! https://tv-turm.de/en/homepage/

East Side Gallery – worth a look, even if just for the profound and often very spine-chilling sentiments protected down there.

Berliner Dom and Museum Island – overwhelming but actually it was really nice to see a bit of classic architecture.

“Many small people, in many small places, do many small things, that can alter the face of the world.”